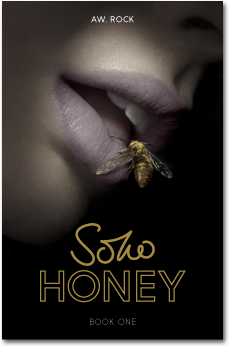 We are asking our readers to let us know what they think of Soho Honey.

Please write a review here or on the Goodreads link below.

“I have now read the novel myself and I think it’s very good. I will not be the only publisher who finds it first rate.”
Christopher MacLehose

A.W Rock says of his character Branen, ”Soho, he loved and hated it … he knew he was unable to leave the place forever”. In truth, it’s really Rock talking about himself. The evocation of the place he knows and loves so well is as powerful as the characters and plot: dark, disturbing and a dangerously addictive read.

It was a crackingly good story; painstakingly researched and put together as a very fluid whole. A passing familiarity with some of the locations helped but was not essential. It drew together a wide variety of characters; those central to the plot were carefully built up to give a very full picture in the reader’s mind.

My favourite character had to be Brannen. His reactions to the triumphs and tragedies in the book and his dogged steps to survive were uncompromisingly and unsentimentally portrayed.

Jay Villiers was the right man to voice this novel. His ability to switch in and out of character was remarkable. It was the audio equivalent of a “page-turner” and so became something very much to look forward to when getting into the car.

I got this book following the recommendation of a friend. It proved to be a very good steer. I thoroughly recommend it and look forward to the next one from this author.

London never looked so noir. Plot, character and background are woven into a compelling story which makes you see the streets through new and suspicious eyes.

“I don’t read spy / thriller / graphic sex books, not my kind of thing – couldn’t put it down, loved it, well done.”

“As soon as Branen’s daughter is involved the fast pace of the story turns to suspense and a brilliant story builds up leading on from her murder.”

“The plot line has twists and turns and was exciting to read.. with each page turn I was left wondering what else could possibly happen!”

I can’t wait for the next Soho Honey book and I really hope they make a TV series and/or a movie – wouldn’t that be great?

The buzz about this book is incredible. I can’t believe how fast I flew through it. The story dances from page to page, delivering narrative nectar at every turn. Can’t wait for the film to emerge from this creative hive!

Vivid, graphic and compelling, Soho Honey stays in the mind long after the last page …..

I enjoyed reading ‘Soho Honey’ and I think you’ve created an engrossing story here. You are extremely detailed on the operations of secret government agencies and on the weaponry and operational techniques of government assassins, which you mix well with the seedy, urban slice of life that you evoke in Soho.